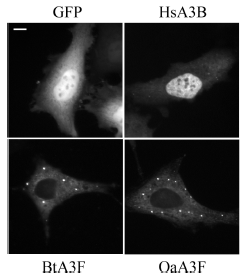 The human APOBEC3G protein is an innate anti-viral factor that can dominantly inhibit the replication of some endogenous and exogenous retroviruses. The prospects of purposefully harnessing such an anti-viral defense are under investigation. Here, long-term co-culture experiments were used to show that porcine endogenous retrovirus (PERV) transmission from pig to human cells is reduced to nearly undetectable levels by expressing human APOBEC3G in virus-producing pig kidney cells. Inhibition occurred by a deamination-independent mechanism, likely after particle production but before the virus could immortalize by integration into human genomic DNA. PERV inhibition did not require the DNA cytosine deaminase activity of APOBEC3G and, correspondingly, APOBEC3G-attributable hypermutations were not detected. In contrast, over-expression of the sole endogenous APOBEC3 protein of pigs failed to interfere significantly with PERV transmission. Together, these data constitute the first proof-of-principle demonstration that APOBEC3 proteins can be used to fortify the innate anti-viral defenses of cells to prevent the zoonotic transmission of an endogenous retrovirus. These studies suggest that human APOBEC3G-transgenic pigs will provide safer, PERV-less xenotransplantation resources and that analogous cross-species APOBEC3-dependent restriction strategies may be useful for thwarting other endogenous as well as exogenous retrovirus infections.