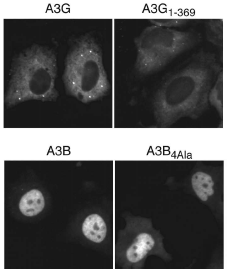 APOBEC3G limits the replication of human immunodeficiency virus type 1, other retroviruses, and retrotransposons. It localizes predominantly to the cytoplasm of cells, which is consistent with a model wherein cytosolic APOBEC3G packages into assembling virions, where it exerts its antiviral effect by deaminating viral cDNA cytosines during reverse transcription. To define the domains of APOBEC3G that determine cytoplasmic localization, comparisons were made with APOBEC3B, which is predominantly nuclear. APOBEC3G/APOBEC3B chimeric proteins mapped a primary subcellular localization determinant to a region within the first 60 residues of each protein. A panel of 25 APOBEC3G mutants, each with a residue replaced by the corresponding amino acid of APOBEC3B, revealed that several positions within this region were particularly important, with Y19D showing the largest effect. The mislocalization phenotype of these mutants was only apparent in the context of the amino-terminal half of APOBEC3G and not the full-length protein, suggesting the existence of an additional localization determinant. Indeed, a panel of five single amino acid substitutions within the region from amino acids 113 to 128 had little effect by themselves but, in combination with Y19D, two substitutions-F126S and W127A-caused full-length APOBEC3G to redistribute throughout the cell. The critical localization-determining residues were predicted to cluster on a common solvent-exposed surface, suggesting a model in which these two regions of APOBEC3G combine to mediate an intermolecular interaction that controls subcellular localization.