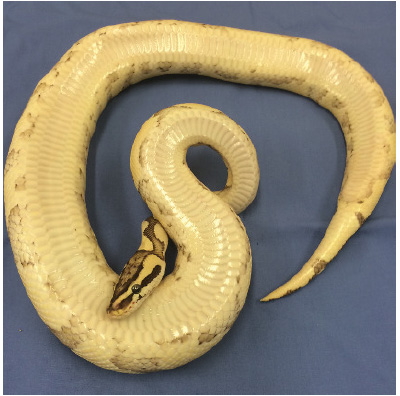 Inclusion body disease (IBD) is an infectious disease originally described in captive snakes. It has traditionally been diagnosed by the presence of large eosinophilic cytoplasmic inclusions, and is associated with neurological, gastrointestinal and lymphoproliferative disorders. Previously, we identified and established a culture system for a novel lineage of arenaviruses isolated from boa constrictors diagnosed with IBD. Although ample circumstantial evidence suggested that these viruses, now known as reptarenaviruses, cause IBD, there has been no formal demonstration of disease causality since their discovery. We therefore conducted a long-term challenge experiment to test the hypothesis that reptarenaviruses cause IBD. We infected boa constrictors and ball pythons by cardiac injection of purified virus. We monitored progression of viral growth in tissues, blood, and environmental samples. Infection produced dramatically different disease outcomes in snakes of the two species. Ball pythons infected with Golden Gate virus (GoGV) and with another reptarenavirus displayed severe neurological signs within two months and viral replication was only detected in central nervous system tissues. In contrast, GoGV-infected boa constrictors remained free of clinical signs for two years despite high viral loads and the accumulation of large intracellular inclusions in multiple tissues including the brain. Inflammation was associated with infection in ball pythons but not in boa constrictors. Thus, reptarenavirus infection produces inclusions and inclusion body disease, although inclusions per se are neither necessarily associated with nor required for disease. Although the natural distribution of reptarenaviruses has yet to be described, the different outcome of infection may reflect differences in geographical origin.

IMPORTANCE New DNA sequencing technologies have made it easier than ever to identify the sequences of microorganisms in diseased tissues, i.e. to identify organisms that appear to cause disease. But to be certain that a candidate pathogen actually causes disease, it is necessary to provide additional evidence of causality. We have done this to demonstrate that reptarenaviruses cause inclusion body disease (IBD), a serious transmissible disease of snakes. We infected boa constrictors and ball pythons with purified reptarenavirus. Ball pythons fell ill within two months of infection and displayed signs of neurological disease typical of IBD. In contrast, boa constrictors remained healthy over two years despite high levels of virus throughout their bodies. This difference matches previous reports that pythons are more susceptible to IBD than boas and could reflect the possibility that boas are natural hosts of these viruses in the wild.