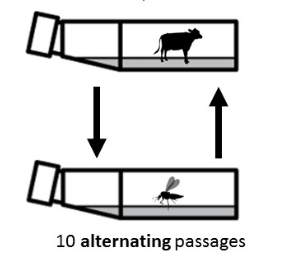 Bluetongue virus (BTV) is an arbovirus that has been associated with dramatic epizootics in both wild and domestic ruminants in recent decades. As a segmented, double-stranded RNA virus, BTV can evolve via several mechanisms due to its genomic structure. However, the effect of BTV's alternating-host transmission cycle on the virus's genetic diversification remains poorly understood. Whole genome sequencing approaches offer a platform for investigating the effect of host-alternation across all ten segments of BTV's genome. To understand the role of alternating hosts in BTV's genetic diversification, a field isolate was passaged under three different conditions: (i) serial passages in Culicoides sonorensis cells, (ii) serial passages in bovine pulmonary artery endothelial cells, or (iii) alternating passages between insect and bovine cells. Aliquots of virus were sequenced, and single nucleotide variants were identified. Measures of viral population genetics were used to quantify the genetic diversification that occurred. Two consensus variants in segments 5 and 10 occurred in virus from all three conditions. While variants arose across all passages, measures of genetic diversity remained largely similar across cell culture conditions. Despite passage in a relaxed in vitro system, we found that this BTV isolate exhibited genetic stability across passages and conditions. Our findings underscore the valuable role that whole genome sequencing may play in improving understanding of viral evolution and highlight the genetic stability of BTV.